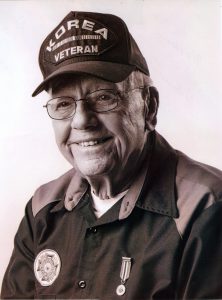 Wayne (Mitch) James Mitchell, 90, of Canton, SD died November 4, 2020 surrounded by his loving family at his beloved farm home. A family only mass will be held at St. Dominic’s Catholic Church on Monday November 9, 2020 at 10:30 AM with burial to follow at the Forest Hill Cemetery.  The Canton VFW/American Legion Color Guard will be providing graveside military rites.  A link to a livestream of the service can be found at www.andersonandsonsfh.com

Wayne was born October 28, 1930 on a farm 4 miles east of Canton to Donald and Anna (Albertson) Mitchell. He attended York District 21 country school and graduated from Canton High School in 1948.

Wayne was in the US Army serving from 1952-1954 in the Korean War. As a Korean War soldier, he was awarded the Korean Service Medal with two bronze service stars, United Nations Service Medal, National Defense Service Medal, ROK Presidential Unit Citation, Bronze Star Medal with “V”, which is the fourth highest military decoration for valor. In 2013, he returned to Korea and explored the area where he was in combat. When asked “What looks the same as when you were here?” he replied, “the mountains.”

He married Mary Ann Sturzl (Pipestone, MN) in 1957. They made their home in Canton and enjoyed a life filled with laughter and adventure, fueled by seven enthusiastic children. After their children graduated from high school, Wayne and Mary moved out to the family farm, about 5 miles north of Canton. Mary passed away in 2005. In 2008 he married Sharon Reidinger in Pierre, SD. For the past twelve years they continued to live on the farm and have been involved with community activities as well as continuing to farm.

A lifetime member of St. Dominic Church, he was a Religious Education teacher, Lector and Eucharistic Minister. He was a dedicated servant to others through the Chamber of Commerce, Knights of Columbus, American Legion, DAV and Veteran of Foreign Wars Post 3164 in Canton. He was an active member of the Color Guard for over 40 years and served twice as VFW Post Commander and District 1 Commander. He was Post Quartermaster for over 20 years. He received the honors of All-State Quartermaster in 2010 and currently as Special Aide-de-Camp to National VFW Officers. He was a leader in starting the Sunday VFW Pancake breakfast in Canton, and remained active until the shutdown in February 2020.

Known as a hard worker, he worked at and later managed the Dakota Fertilizer plant as a young adult. For many years, he owned Interstate Lime that evolved into Interstate Construction. For ten years he served Dayton Township doing road maintenance and snow removal. He was employed as a maintenance man at Avera/McKennan Hospital for fifteen years, retiring at age 75.

Wayne had many interests and was a farmer at heart with a love for the land he grew up on. He always had a large garden and enjoyed sharing the produce with family and friends. Wayne was a big motorcycle rider early in his life, his first being a 1947 Harley Davidson Knucklehead. When he got busy working and raising a family, the motorcycle went away. His 80th Birthday was celebrated with the purchase of a Harley Davidson Heritage Softail. Flying was an interest to Wayne since he was a child. He was a licensed private pilot and member of the Canton Flying Club. He also enjoyed camping with friends and family. When dance music was played, he would be on the dance floor. He was noted for helping to move relatives, friends, and strangers throughout the area.

Cards may be sent to Anderson Funeral Home P.O. Box 36 Canton, SD 57013. In lieu of flowers, memorials in memory of Wayne may be made to Canton VFW Youth Scholarship Fund or to your local Food Pantry.