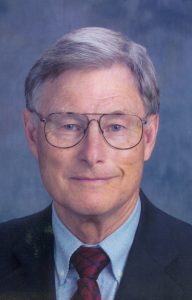 Murray Asher Rowe, a lifelong resident of Canton S.D., was a man of deep faith who loved Jesus. He was a devoted son, husband, father, grand and great grandfather, uncle, friend, employer, leader, community advocate, C-Hawk supporter, competitor, aviator, inventor, and entrepreneur. He lived his life loving his family, community and church and passed away at Ava’s House (hospice) on November 5, 2020.

Murray was born September 2, 1932 to Ernest and Iva (Anderson) Rowe. He grew up in Canton, S.D. and graduated from Canton High School in 1950. He attended Northwestern University in Evanston, Illinois for three years and then returned to S.D., graduating from the University of South Dakota in 1954 with a Bachelor of Science in Business Administration.

In 1954 Murray was drafted into the U.S. Army and served as a specialist in electronics. He was one of two men from his unit selected to attend a special radar school in Fort Monmouth, NJ.

Upon discharge from the Army in 1956, Murray returned to Canton to join the family business at Canton Block and Tile Company. After meeting on a blind date, he married the love of his life, Helen Long, on August 11, 1958 in Rock Valley, IA.  In 1962, Murray formed Bid-Well Corp. after entering a partnership with S.P. (Tex) Bidwell. This company manufactures concrete paving machines and continues to pave bridges, airports and canals in over 40 countries, including paving the underwater Chunnel between England and France in 1994. Murray was also very proud to be a founding member of The Ramkota Companies in 1965, along with the Kelly Inns Ltd. and Regency Hotel Management company.

Murray’s entrepreneurship and ingenuity did not go unnoticed. In 2004, he was honored in Washington, D.C. as one of America’s Top 100 Private Sector Transportation Design and Construction Professionals of the 20th Century. To mark this occasion and Murray’s accomplishments, Governor Mike Rounds proclaimed it “Murray Rowe Day” in South Dakota. In 2005, Murray was also inducted into the South Dakota Transportation Hall of Honor in Pierre, S.D., and in 2006 he was inducted into the South Dakota Hall of Fame in Chamberlain, S.D.

After many years at the helm of Canton Block and Tile Co. and Bid-Well Corp., it was a common site to see individuals approach Murray, shake his hand, and tell him what an honor it was to work with him.

Beyond business, the Canton community was a big part of Murray’s life. Throughout the years, he was a member of the Canton Rotary Club, Canton Airport Board, American Legion, Sons of Norway, Deacon, President and Sunday school teacher at Canton Lutheran Church. He also served as a member of the cabinet committee of the Augustana Fellows. In 2013, Murray was honored as the Canton Chamber Citizen of the Year. We often hear about the Random Acts of Kindness movement, Murray and Helen Rowe could be the face of that movement, always willing to offer a helping hand.

A man of many talents, Murray had a passion for playing the piano. He was an avid snow and water skier, he loved golf, tennis and hunting. Another passion of Murray’s was flying. He received his private pilot’s license in 1965. Although he traveled the world, his favorite family vacation times were the annual summer week spent at Dickerson’s Lake Florida Resort in Minnesota.

Any game night, no matter what the sport or activity, Murray could be found watching the C-Hawks. He not only watched his own children and grandchildren perform for Canton High School, he proudly cheered for all Canton athletes and performers. He will always be remembered as a huge C-Hawk Booster.

Although dementia impaired his memory in recent years, Murray’s legacy will be remembered for years to come. In 1999 when he retired as the President of Bid-Well, Murray said his professional career was built on a simple foundation, “We sold success. We guaranteed it. Our handshake was our bond.” In his professional and personal life, Murray always stayed true to his word.

Funeral services will begin at 2:00 p.m., Monday, November 9, 2020 at Canton Lutheran Church.  Visitation, with family present, will be Sunday, from 3-8 p.m. at Canton Lutheran Church.  Mask use and social distancing will be required.  Memorials will be directed towards the Murray and Helen Rowe Scholarship Fund. This will be established for a high school senior boy and girl from Canton High School.  A link to the livestream of Murray’s service can be found at  www.andersonandsonsfh.com

Murray’s family would love for you to share your favorite memory of Murray by leaving a condolence on the website or mailing a card to Anderson Funeral Home  P.O. Box 36 Canton, SD 57013.

35 condolences have been left