Service: A memorial service will be held at a later date with burial of his ashes in the Sioux Falls Veterans Cemetery. 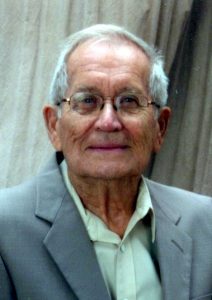 Art Kimball, age 99, died Tuesday, November 3, 2020 at Good Samaritan Society Canton.  A memorial service will be held at a later date with burial of his ashes in the Sioux Falls Veterans Cemetery.

Art Kimball, son of Edward and Henrietta Kimball, was born on April 6, 1921 in Butte, NE.  He grew up in Butte, graduating from Butte High School.

In September 1942 he joined the Army, serving in Burma, India and China.  He was a member of the Worthing Legion for 60 years and a member of the VFW for 50 years.  He worked as a letter carrier for 30 years and was a member of the Letter Carriers Union for 53 years.  Art joined the Air National Guard in 1954 and served 30 years.  He was a long-time member of St. Dominic’s Catholic Church.  Art enjoyed camping, traveling, and spending time with his family.  He also enjoyed spending winter down south and serving as a campground host in Colorado.

In 1952 he was joined in marriage with Racine Dirkson at St Joseph’s Cathedral in Sioux Falls, SD.  To this union was born a daughter, Sue (Von) Denning of Corsica, SD and 2 sons, Thomas (Jody) Kimball, Sioux Falls, SD and Brian (Dee) Kimball, Longmont, CO; 6 grandchildren; 14 great-grandchildren; and 6 great-great grandchildren. He is also survived by his sister, Jean Culver of Plano, TX, along with numerous extended family and friends.  He was preceded in death by his parents, 4 brothers, and 2 sisters.