Visitation: Visitation, without family present, will be Wednesday, November 4 from 5-7 p.m. at Anderson Funeral Home in Canton.
Service: Private family funeral services will be held on Thursday at 10:00 a.m.. 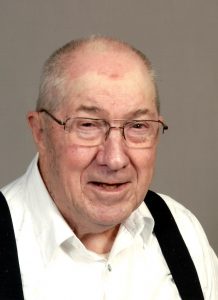 Vincent John McKenney, age 91, died from Covid-19 complications, Saturday, October 31, 2020 at Good Samaritan Society Canton. His goal was to become the oldest living McKenney.  He attained this by out living his Grandpa Herbert McKenney by one day to age of 91 years, 11 months and 8 days of age.  Visitation, without family present, will be Wednesday, November 4 from 5-7 p.m. at Anderson Funeral Home in Canton.  Private family funeral services will be held on Thursday.

Vince was born on November 23, 1928 in Iowa in a farmhouse northeast of Fairview. He attended Sioux County Country School in Iowa.  He proudly served his country in the US Army during the Korean War from 1951-1953.    He was awarded the Korean War Service Medal by Korea in June of 2000.   He married Gladys Braaten on September 23, 1955 in Canton, SD.  The couple made their home in Canton.   In 1962 he proudly built their “Forever Home” and construction shop on the edge of Canton.

After learning carpentry with Neil Borsma Construction, he started his own construction business, McKenney Construction, in 1958 and ran it for 50+ years. He built numerous homes within a 50-mile radius of Canton along with many other projects.  Some of the more notable were the Canton Bowling Alley, several Pizza Huts, Dairy Queen, additions on numerous churches, and the restoration of Kennedy Mansion.   He worked jointly with McEntee Construction on many projects.  He semi-retired in 1991 but continued to oversee the business.

Vince enjoyed being very active in his community in many capacities.   He was a member of the Lions Club for 40 years, a volunteer fireman for 15 years, a Canton City Commissioner for 5 years, served on the Canton Development Board, was a lifetime member of the VFW, and made an unsuccessful run for Canton Mayor.  He received a Distinguished Service Award for Courageous Service from the Canton Chamber of Commerce for helping rescue 2 people from a Ferris Wheel accident in Canton on August 22, 1986.  He enjoyed going on crow hunts, pheasant and deer hunting, fishing with his daughter and son-in-law, and coffee with the guys.