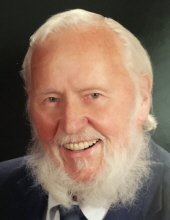 He graduated high school in 1953 from Augustana Academy in Canton, SD. He earned an associate degree in Industrial Arts from Waldorf College in 1955 and after a stint in the Army he returned to Sioux Falls, S.D. to earn a bachelor’s degree in Sociology from Augustana College in 1960, followed by a master’s degree (MSW) from the University of Iowa in 1963.

Gene went on to be one of the founders of the Department of Psychiatry at SIU School of Medicine in 1973. He retired August 14, 2020 after over 47 years at SIU-SM as an Associate Professor, Licensed Clinical Social Worker, and Psychotherapist. He was known to take leadership roles throughout his career and gained recognition, earning many awards from a multitude of organizations including the Who’s Who “Professional of the Year” and “Distinguished Alumnus” at Augustana College. He loved to sing and was a member of the Barbershop Chorus, the Springfield Choral Society and the Jacksonville Orchestra Chorale. Gene was also the president of a bowling league and very involved in the Junior Football League in Springfield for many years.

He and his wife Evie enjoyed several trips to Europe and toured 10 countries there while singing with the Springfield Choral Society.

Gene was preceded in death by his parents and brother, Wayne Brodland.

Visitation will be from noon to 2:00 p.m., Saturday, September 19 at Anderson Funeral Home in Canton, SD.  A private family burial will take place following the visitation at Lands Lutheran Cemetery, rural Hudson, SD.