Service: Graveside services will be held at 2:00 p.m. Wednesday, October 7 at Fairview Cemetery, rural Fairview, SD. In lieu of flowers, memorials may be directed to Keystone Treatment Center. Mask use is encouraged at the service. 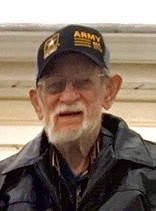 Dayle was born on February 2, 1938, at Fairview, SD to Floyd and Gladys (Iseminger) Eastman. He was the eldest of three children and grew up in the Canton area. He graduated from Canton High School in 1956 and worked at the Newton Hills State Park the following summer. Later, he moved to Sioux Falls and worked as a mail carrier for the US Postal Service. He was a member of the Naval Reserve, but later transferred to the South Dakota National Guard in the 1st of the 147th artillery unit. He was with the unit when they were activated in 1961 and trained at Fort Sill, Oklahoma to be deployed to Germany. He remained with the SDNG for 6 years. He was a member of the Hudson American Legion and served on the Honor Guard. On August 13, 1966 Dayle married Phyllis Jensen in Artisan, South Dakota. To this union two sons were born. Dayle and Phyllis moved to Montclair, CA, and he was a mechanic for Consolidated Freightliner.  Their desire to be closer to family brought them back to Mitchell, South Dakota where he worked as a mechanic for UPS. After a divorce in 1977, he moved to Gillette, WY and was a driver for the mining company for 16 years. In the summer of 1993, he moved back to Beloit, Iowa on his parent’s acreage. Here he did some truck farming and worked as a transport driver for the residence of Good Samaritan Nursing Home.

Dayle enjoyed playing cards at the Senior Citizens Center and riding his motorcycle with the Christian Motorcycle club of which he was an active member. His Sunday evenings were spent at Keystone Treatment Center as an inspirational speaker for recovering alcoholics. He was a sponsor to several recovering alcoholics and always was a compassionate friend to them. He asked very little for himself, but was willing to give all he could to help others.

Dayle was a confirmed member of the Canton Methodist Church and presently attend the River of Life congregation in Canton. He cherished his many friends there as well as his Bible Study with Rev. Steve Ziebarth and friends at the Senior Citizens Center.

He was preceded in death by his parents, brother, Don, and nephew, Conrad Welbon and the mother of his sons, Phyllis.