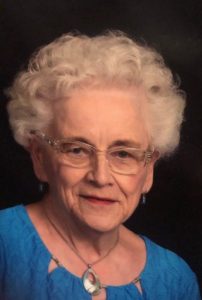 Elsie was born at home on August 12, 1930 to Berndt and Maime (Orstad) Aasheim in Highland Township, Lincoln County, South Dakota.  She was baptized and confirmed at Lands Lutheran Church. She graduated from Canton High School and went on to college in Madison, South Dakota earning a teaching degree.

On June 11, 1952 she married Gordon Severson at Lands Lutheran Church. She taught school in Highland Township for a short time.  They moved to Platte where Gordon owned and helped operate Severson Service for 40 years. In addition to being the best stay at home mother in the world, she worked in the school cafeteria for several years.  They moved back to Canton in 1996 which she always said with a big grin that we are back home.  She was known as the cookie grandma within the family as she made thousands of them for her kids, grandkids, and great-grandkids. She always had a casserole to throw in the oven when family or friends would stop by unexpectedly.  Elsie wore a lady bug pin on her back shoulder which always started conversations with many that she met.  Her grandkids also recognized her as the “Lady Bug” grandma.

In lieu of flowers or gifts, memorials may be sent directly to a charity of your choice.