Visitation: Visitation, without family, will be Sunday from 3-5 p.m. at Anderson Funeral Home in Canton.
Service: Funeral services will begin at 10:00 a.m. Monday, August 24 at Bethany Reformed Church in Canton, SD. 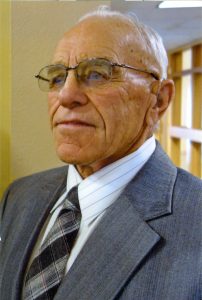 Case Van De Stroet, age 84, died Thursday, August 20, 2020 at Touchmark at All Saints in Sioux Falls, SD.  Funeral services will begin at 10:00 a.m. Monday, August 24 at Bethany Reformed Church in Canton, SD.  Visitation, without family, will be Sunday from 3-5 p.m. at Anderson Funeral Home in Canton.

Case was born on December 25, 1935 in Zeist, Holland to Jo and Wilma ( de Ruiter) Van De Stroet.  His family immigrated to Fairview, SD when Case was 12.  He became a U.S. citizen on December 6, 1955.  He served in the U.S. Army National Guard.  He married Alice Van De Kieft on April 10, 1957 at First Reformed Church in Inwood, IA.  To this union, Cindy, Jerry and Gene were born.  For the majority of their married lives, the family lived on a farm outside of Fairview, SD.  After retirement, the couple moved to Canton, SD.

In addition to farming, Case worked at the Fairview Elevator.  After retirement, he worked at Inspiration Hills and did pharmacy delivery for Haisch Pharmacy. He enjoyed talking and having coffee, especially at Laurie’s Cafe, playing cards, driving the countryside to look at fields, and church mission trips.  Grumpy, as he was affectionately known to many, loved spending time with his family, talking in Dutch, and spending time with his sisters and brothers-in-law every Sunday.  He was a long-time member and deacon of Bethany Reformed Church in Canton, SD.  Case was also a proud member of the Canton American Legion Color Guard.