Service: Private family services will be held. A public service will be held at a later date. 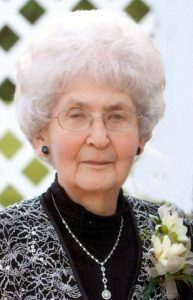 Rose Marie “Rosie” Stensland, age 89, of Canton, SD, went to her heavenly home on Monday, March 23, 2020.  Private family services will be held.  A public Celebration of Life will be held at a later date.  In lieu of flowers, memorials may be directed to Shalom Lutheran Church or Forest Hill Cemetery.

Rosie was born on July 20, 1930 in Sioux City, IA to Irving and Bertha (Enstad) Cox.  She was baptized and confirmed at Canton Lutheran Church.  She attended Highland #41 country school and graduated from Canton High School in 1948.  She married Melvin Stensland on February 12, 1949 in Luverne, MN.  The couple farmed and raised their four children on a farm northwest of Canton, SD.  Melvin passed away on August 17, 2016.

Rosie was a kind, sweet woman with a fun-loving nature.  She was not afraid of hard work and enjoyed mowing the lawn, feeding bottle calves, and recently enjoyed watching the squirrels at the feeder.  She was a 4-H leader and a great cook and baker who will be remembered for her lefse, potato dumplings, bread, and desserts.  As a child she had a sheep named Sally and rode a horse called Nancy to country school- Nancy often got loose and went back home.  Rosie was a Sunday School teacher at Beaver Creek Lutheran Church and assisted with the ice cream socials, Easter sunrise breakfasts, Ladies aide, and much more.  After Beaver Creek closed in 1978, Melvin and Rosie joined Shalom Lutheran.  There she was also active with Shalom breakfasts, Circle, Bible study and quilting group.