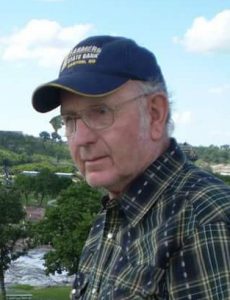 John was born on April 3, 1934 in Worthing, SD to Andrew and Nora (Ness) Anderson.  He grew up in Worthing and graduated from Worthing High School.  After graduation he served his country in the U.S. Army and later in the Navy Reserve.  Jack worked as a mechanic at Canton Block and Tile for 53 years.  After retiring, he enjoyed coffee on his porch, feeding squirrels, and playing with his dogs, Red, PJ and Artie.   He married Marge Chivington in July of 1959.  He married Victoria Anderson in July of 1994.

Jack loved his family and coffee, especially with a cookie.  He enjoyed dancing, tinkering with cars, and lending a hand to people in need.  He had a big heart and loved to make people smile, especially children.  He was an active member of the Canton Optimist Club, playing Santa and the Easter Bunny, building pedal pull tractors, and helping with the annual carnival.  He will be remembered for being a good, hardworking man who was considered a hero to many in his family.