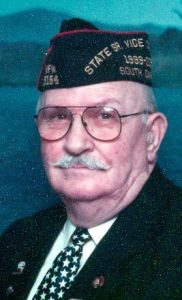 Daryl was born on September 11, 1931 in Dallas County, IA to Roy B. and Lida E. (Randolph) Halling.  He grew up in Dallas County, graduated from Washington Township High School in 1949, and later attended Buena Vista University.  He proudly served his country in the U.S. Air Force.  He married Loretta Welch on December 16, 1951 in Minburn, IA.

After his discharge, the couple lived in IA and farmed with his family.  In 1960, the family moved to the Chicago area when Daryl began working for the Milwaukee Railroad.  The family moved to Canton, SD in 1965 where he remained until his death.  Daryl retired from the railroad in 1978.  He then worked at the telephone company and ended his career at Shakstad Electric, retiring in 1996.  After retirement, he drove school bus until age 80.

Daryl coached Legion and VFW baseball, was a devoted St. Louis Cardinals fan, loved attending his children’s and grandchildren’s sporting events, collected golf balls and railroad memorabilia, and enjoyed working with his tools.  His passion later in life was the VFW.  He was very active on the local, state, and national level.  He was a past post, district, and state commander.  He also served as the State Judge Advocate and State Surgeon. He was a member of the National POW/MIA Committee, the National Security Committee, and was Vice Chairman of the National Veterans Employment and Training Committee.   In addition, he was a member of the local Honor Guard and raised the flag at home football games for many years.