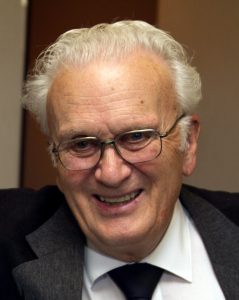 Palmer Paulson, 90, died Wednesday, September 4, 2019 at his home at Luther Manor nursing home in Sioux Falls, SD.  Palmer was born March 18, 1929 on the family farm south of Harrisburg.  He was the son of Severt and Jonny (Bromstad) Paulson.  He attended Prairie Grove country school through 8th grade.  It was at school that he first learned English, having spoken Norwegian at home.  After graduating from high school in 1947, he returned to the family farm to live and farm with his uncle Chris Paulson and mother.  His father had passed away when he was 13 years old.

Palmer served in the U.S. Army from 1951 – 1953 during the Korean war.  He served as a Staff Sergeant in combat in the 2nd Infantry Division, 9th Infantry Regiment, 2nd (Assault) Battalion. After his military service ended, he returned to the family farm and farmed with his uncle Chris.

Palmer married Ingeborg Rye on November 18, 1956 at Beaver Creek Lutheran Church south of Harrisburg.  They lived and farmed on the family farm from 1956 until 1963, when they moved to Sioux Falls.  After the move, Palmer drove truck for Zip Feed Mills and then for Petroleum Carriers.  He then joined the U.S. Postal Service and worked there until he retired as Manager of Distribution for Sioux Falls in 1989 with 25 years of service.  Palmer and Ingeborg, along with their four kids, moved back to the farm in 1971.  Palmer again engaged in farming from 1971 – 1979.  Palmer and Ingeborg moved to Canton in 1995.

Ingeborg moved into Luther Manor in September, 2010 due to advancing Alzheimer’s disease.  Palmer joined her at Luther Manor in 2016 after faithfully spending time with her on a daily basis as health permitted.  Palmer’s Christian faith was important to him.  He was an active member of the church, and also the Sons of Norway in Sioux Falls.  He was also a longtime member of the VFW and American Legion posts in Canton.  Palmer and Ingeborg enjoyed hosting friends at their home.  They also enjoyed many trips back to Norway to visit family and friends.  Palmer kept busy during his retirement raising steers on the farm in the summer, woodworking, driving truck for the elevator in Canton, helping a neighbor farm, and being in the VFW honor guard.