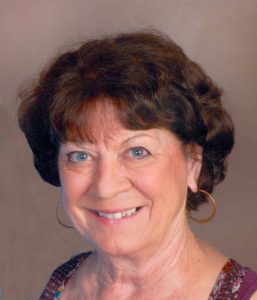 Judi was born December 17, 1947 the oldest child of Charles R. “Jim” Mercer and Dolores Brown Mercer.  She attended her first 6 years of school at St. Boniface Catholic School before transferring to Sioux City Public schools as a 7th grader.  She graduated from Central High School with the class of 1966, and served as the class reunion treasurer for over 25 years.  Judi was united in marriage to Charles D. Dorn in 1966 and to this union a daughter, Jodi Sue, was born.

Judi went to work at First Federal Savings in 1967 and enjoyed a nearly 37 year long career.  She was the bank’s first female branch manager, first female real estate loan officer and was a top producer every year.  She was not happy to be the bank’s first holdup victim.  She was named an Associate Vice President in 1984, and joined a handful of female employees when she was promoted to Vice President in 1991.

She joined the Sioux City Cosmopolitan Club in 1999 and recently attained 20 years of membership.  She was honored as Rookie of the Year in 2000, the Sioux City Club Cosmo of the Year in 2003.  She was the second female President of the Club in 2002-2003.  She was awarded the Patrick J. Hodgins local award in 2008. While in Sioux City Judi was a member of Nativity Church where she served on Parish Council, Finance Committee, ushered, served as a Eucharistic Minister, and sang in adult choir.

Judi met her dance partner for life, Jim Schmidt, at a singles dance in 2000.  They married in July 2003 and Judi was introduced to pheasant hunting, fishing, camping, and country living.  They built a home on a 37 acre site south of Canton, SD and moved in in 2008.  In their retirement years, they have enjoyed camping, fishing, boating and time spent with kids and grandkids.  They have enjoyed spending part of the past four winters in the McAllen, TX area where they formed many close friendships while sightseeing, playing cards and games as well as taking frequent shopping expeditions to Progresso, MX. Judi was a voracious reader and thoroughly enjoyed being part of a diverse group of women and ideas as a member of the Canton Reading Circle.  Canton introduced her to MahJongg and she played weekly with two groups in Canton.  Although she played bridge occasionally in Canton, she continued to make a monthly trip to Sioux City to play bridge with some gals she’d played with for over forty years.  She treasured the friendships she’d made through all these activities.

In lieu of flowers, Judi requested that gifts be considered to the Sioux City Cosmopolitan Club for diabetic children’s camp scholarships, or to Redeemer Free Music.