Visitation: Visitation, with family present, will be Friday from 5-7 p.m. at the church. A Scripture Service will be held at 7:00 p.m.
Service: Mass of Christian Burial will begin at 10:00 a.m. Saturday, June 15 at St. Dominic Catholic Church in Canton. 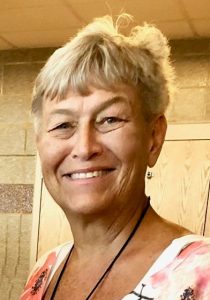 Nancy Lyle, age 64, died Tuesday, June 11, 2019 at Dougherty Hospice House surrounded by her family.  Mass of Christian Burial will begin at 10:00 a.m. Saturday, June 15 at St. Dominic Catholic Church in Canton.  Visitation, with family present, will be Friday from 5-7 p.m. at the church.  A Scripture Service will be held at 7:00 p.m.

Nancy Marie was born on October 31, 1954 in Hawarden, IA to Rolland and Ona (Johnson) Abraham.  She grew up in rural Beresford, graduating from Beresford High School in 1972.  She earned an LPN degree from Lake Area Tech in Watertown and later a RN degree from USD in Vermillion.  She married Mike Lyle on July 20, 1974 at Dalesburg Lutheran Church, Vermillion, SD.  The couple made their home in Canton, SD and wintered in Mesa, AZ (over the last 10 years).

Nancy was a dedicated nurse who was respected by both patients and staff at Avera Behavioral Health and Keystone Treatment Center, where she was the Director of Nursing for many years. She enjoyed antiquing, riding motorcycle, going to the zoo, and sharing her love of Organ Stop Pizza with family and friends.  She was a professional shopper who never missed a rummage sale and believed Christmas shopping was a year-round activity.  When not hunting for a deal, she cherished time with her family.  Attending her children’s and grandchildren’s activities was her greatest joy.  She was a member of the Red Hat Society and a Superbowl group.  She will be remembered for being a good friend who was always willing to help those in need.

20 condolences have been left