Visitation: Visitation will be Thursday from 2-7 p.m., family present 5-7 p.m., at Anderson Funeral Home in Canton.
Service: Her funeral service will begin at 10:00 a.m. Friday, June 21 at Canton Lutheran Church. 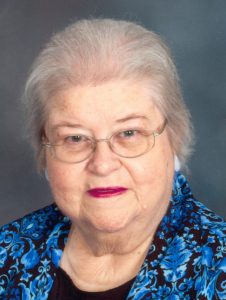 Laura grew up in the rural Alcester and Canton areas before moving to Canton in 1947.  Laura attended school in Canton, graduating from Canton High School in 1953.  She married Palmer Sivertson on November 6, 1953 at Canton Lutheran Church.  They lived and farmed north of Canton.  She has been a member of Canton Lutheran Church since 1947, participating in Ladies Aide, Ruth Circle, Alter Guild, and the prayer chain.  She enjoyed cooking and baking, flowers and her strawberry garden.  Her husband, Palmer, died on August 13, 2001.  On December 13, 2003 Laura moved to Hiawatha Heights, where she lived until her passing.