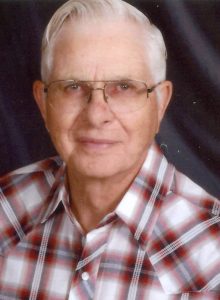 Glenn was born on March 28, 1936 to Arne and Agnes (Laugen) Homandberg.  He graduated from Canton High School in 1954.  He married Evelyn McKenney on May 24, 1960 at Canton Lutheran Church.  The couple farmed and raised livestock outside of Beloit, IA until 1995 when they moved and began farming east of Leota, MN.  After semi-retiring, he moved to Lismore, MN.  Glenn enjoyed collecting tractors and toys, playing cards, visiting, and after his wife, Evelyn, passed away in 2003, he took over her card writing job to pen pals and family.  Family was very important to Glenn.  He loved attending his grandchildren’s events and never missed a family reunion.  He will be remembered as being a kind man who always put family first.