Visitation: Visitation, with family present, will be Thursday from 5-7 p.m. at St. Dominic’s. A scripture service will be held at 7 p.m.
Service: Mass of Christian Burial will begin at 10:00 a.m. Friday, April 26 at St. Dominic Catholic Church, Canton, SD. 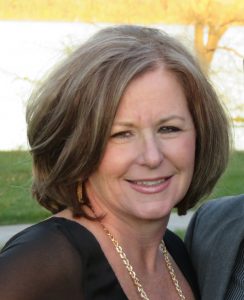 Jill Olinger, age 57, passed away peacefully Tuesday, April 23, 2019 at Dougherty Hospice House.  Mass of Christian Burial will begin at 10:00 a.m. Friday, April 26 at St. Dominic Catholic Church, Canton, SD.  Visitation, with family present, will be Thursday from 5-7 p.m. at St. Dominic’s.  A scripture service will be held at 7 p.m.

Jill was born on August 4, 1961 in Sioux Falls, SD to Curt and Sally (Sabers) Jorgenson.  She grew up in Huron and also lived in Denver, Dallas and Kansas City.   After graduation from High School in 1979, she attended Business College in Huron.  She met the love of her life and best friend, Kevin Olinger, and they were married on August 14, 1982 in Huron, SD.  They had three sons, Josh, Travis and Hayden. She has lived in Canton, SD since 1997 and is very involved in the community.

Jill was a person of great faith and believed strongly in all that the Catholic Church stood for and practiced it every day by the way she lived her life. Her life was full of people that loved her; none more so than Kevin and her family.  She was very involved in St. Dominic’s Church in Canton, SD.  She not only worked there but spent countless hours volunteering her time there.  She was a leader by example; she took charge and got things done!  She was talented in so many areas.

Jill loved being a mom and was very proud of her boys and was so excited to welcome Alex (Travis’s wife) into their family of boys.  Jill had a zest for life that not many people have.  She was silly, entertaining, creative, happy, strong, generous, and incredibly kind and giving.  She lit up the room with her contagious laugh and had an impact on everyone that she met.  There was no one quite like Jill!

20 condolences have been left