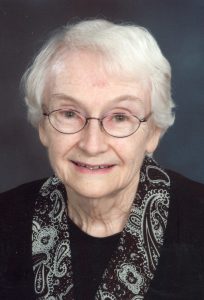 Bernice was born January 3, 1928 near Canton to Ole and Inga (Holdahl) Homandberg who were both immigrants from Valdres Norway. She attended Sunnyside District 5 country school and graduated from Canton High School in 1946.  She was baptized and confirmed at Canton Lutheran Church.  A highlight of her life was an extended trip to Norway with her parents in 1947.  She married Earl Parkinson and lived in California, Seattle WA, and Okinawa.  In 1965 she married J. Gordon Grane and became a full time farm wife and mother.  She was financial secretary with various employers, including Lockheed, Farmers State Bank, and Canton Lutheran Church.  She was modest regarding her artistic gifts, especially oil painting and rosemaling.  She enjoyed reading and sewing both clothing and quilts. Bible study was a passion of hers.  In later years she was a Stephen Minister and was a volunteer Bible Study Leader at Hiawatha Heights Assisted Living.

Bernice was preceded in death by her husband J. Gordon Grane, her parents, her sister Olga Espeland, 3 infant siblings, and a niece Diane Tipple.

Memorials may be directed to the charity of your choice.