Visitation: Visitation with family present will be Sunday from 2-4 p.m. at Anderson Funeral Home in Canton.
Service: Funeral services will begin at 1:30 p.m. Monday, March 4 at Canton Lutheran Church. 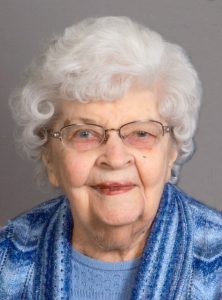 Carol was born in Klondike, IA on December 20, 1927 to Harold and Olive (Severson) Madland.  She graduated from Canton High School in 1945.  She married Don Crawford on October 12, 1947.    Carol worked at the Canton Creamery before starting a 43 year career at Farmers State Bank in Canton, working her way up to Vice President.

She enjoyed bowling, golf, and spending time with her family.  She was known for her putting ability and won the Club Championship in 1974.  She was also an active member of numerous boards and organizations in the Canton Community.  She was named the Canton Citizen of the Year in 1987.