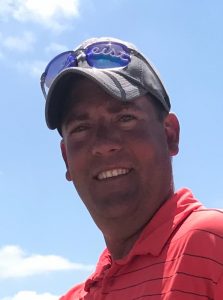 Chad Wayne Johnson was born September 3, 1973 in Sioux Falls to Wayne and Donna (Pierson) Johnson.  He attended school in Harrisburg, graduating in 1992.  He then attended SDSU and Southeast Tech, graduating with a AAS in Civil Engineering Technology. He was employed at Concrete Materials working as an aggregate and asphalt sales rep.

From the minute you met Chad, you were greeted by his big smile. He enjoyed keeping busy – hunting, fishing, golfing, and laughing – with family and friends.  At home he was always on to the next project, rearranging and cleaning the garage, blowing leaves, using power tools, and feeding his “friends” (the birds). He loved his family with his whole heart and his daughter was the center of his world. There are no words to accurately describe how badly he will be missed.