Visitation: Visitation with family present will be Monday from 5 to 7:00 p.m. at Anderson Funeral Home.
Service: Funeral services will be at 10:00 a.m. Tuesday, August 14, 2018 at Canton United Methodist Church. 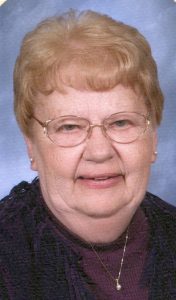 Lois Amen, age 81, died Saturday, August 11, 2018 at StoneyBrook Suites in Sioux Falls, SD. Funeral services will be at 10:00 a.m. Tuesday, August, 14 at Canton United Methodist Church. Visitation with family present will be Monday from 5 to 7:00 p.m. at Anderson Funeral Home in Canton. Memorials may be directed to the Crazy Horse Memorial Foundation or Canton United Methodist Church.

Lois was born September 5, 1936 at Aberdeen, SD to Roy and Mabel (Olson) Roseth.

Lois was united in marriage to Lloyd Amen June 10, 1955 in Canton. Lois was a teacher’s aide at C.C. Jacobson and E.O. Lawrence Schools in Canton for many years. She also worked at the Lincoln County Courthouse and was a bookkeeper at Canton United Methodist Church, her home church. Lloyd and Lois enjoyed many summers in the Black Hills at the campgrounds in Custer. She had a special fondness watching the progress on the Crazy Horse Monument and going to the buffalo round ups. Lois was a long-time member of Helen’s coffee group. Lois’ husband Lloyd died in 1997.

Grateful for having shared her life are her sons- Doug and his wife Marilyn of Canton and Dan of Rapid City, SD; three grandchildren- Daniel Amen, Michael Amen, and Jessica McCart; a sister, Gwen (Dave) Herrick, Sioux Falls; sisters-in-law- Natalie Stroschein and Gwen Amen; and several nieces. She was preceded in death by her parents, her husband, and sister, Mavis Gustafson.