Visitation: Family will greet visitors one hour prior to the service.
Service: A memorial service will begin at 2:00 p.m. Saturday, July 7th at Heritage Funeral Home in Sioux Falls, SD 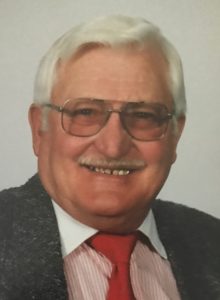 Dayton Sneve, 92, passed away Monday, June 25, 2018. A memorial service will begin at 2:00 p.m. Saturday, July 7 at Heritage Funeral Home in Sioux Falls. Family will greet visitors one hour prior to the service.

Dayton was born on April 14, 1926 in Sioux Falls, SD to Arnt and Mabel (Iverson) Sneve.  He grew up in Sioux Falls, graduating from Washington High School in 1944.  He then served in the US Navy 1944-1946.  He married Karis Beymer in 1953. Dayton farmed on their land in Lincoln County from 1955-2004.  In addition to farming, Dayton worked at Zip Feed, sold John Deere equipment, and was an auctioneer.

He is survived by his five children: Stephen (Consuelo), David (Kyle), Mark (Kelley), Mary (Delmer Johnson), and John (Jill Nelson); 12 grandchildren: Jennifer, Jessica, Joseph, Chad, Adam, Jason, Kristen, Dayton, Erik, Kala, Collin, Kerrigan; 14 great-grandchildren; along with numerous extended relatives and friends.  He was preceded in death by his parents, wife, Karis, and infant son Joseph. Dayton’s family would like to thank the Good Samaritan staff for the excellent care he received during his stay.