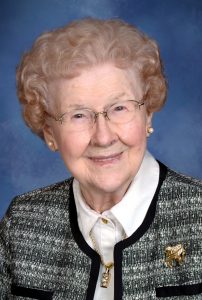 Funeral services for Bessie Engstrom will be Saturday, May 19, 2018 at 2:00 PM at the Kanawha Lutheran Church, 124 West Fourth Street in Kanawha, with Pastors Geoffrey and Char White officiating.  Burial will be held at the Amsterdam Township Cemetery in Kanawha.

Visitation will be held on Friday, May 18, 2018 from 6:00 – 8:00 PM at Ewing Funeral Home, 118 East Second Street in Kanawha and will continue one hour prior to services at the church on Saturday.

Bessie Julia Nelson was born on June 16, 1919 in Roland, Iowa to Eli Nelius and Josephine “Margaret” (Hegland) Nelson. She was baptized and confirmed in the Bergen Lutheran Church in Roland, Iowa. She graduated from Roland High School in 1937, attended St. Olaf College, and transferred to Iowa State Teachers College where she graduated in 1941 with a Bachelor’s Degree in Elementary Education. After graduation Bessie taught kindergarten in Kanawha where she met her future husband Ed.

On January 30, 1943, Bessie was united in marriage to Edward J. Engstrom in Roland, Iowa while Ed was home on leave during WWII.  The couple made their home on a farm southwest of Kanawha.  To this marriage, three children were born.  The couple continued to farm until Ed’s retirement at the age of 78, and they continued to live on the farm until November 2010.

Bessie went back to get her art degree at Drake University in 1966 and started teaching art in grades 1-8 and kindergarten. She was very involved at the Kanawha Lutheran Church and played the organ for over 50 years. She participated in many community activities and organizations.

Bessie was a loving wife, mother, grandmother, friend, and neighbor. She was an avid reader and she enjoyed traveling with Ed and their family.  Ed and Bessie visited 49 states and 6 continents.  She took a great interest in the lives of her grandchildren and great-grandchildren.

Bessie was preceded in death by her parents, her husband, of 68 years, Edward Engstrom in 2011, brothers Marvin and Paul, and her sister Sarah.