Visitation: Visitation is at Anderson Funeral Home in Canton from 3:00 to 6:00 p.m. on Saturday, April 28.
Service: Jane’s funeral service will be held at Canton Lutheran Church on Sunday, April 29, at 2:00 p.m. 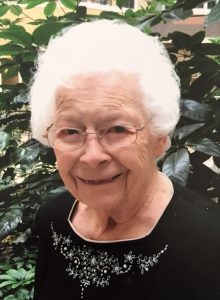 Born to Dr. Cecil E. and Grace Loring Carl, Jane grew up in Waterloo, IA, attended MacMurray College in Jacksonville, IL, and graduated from Iowa State Teachers College (now the University of Northern Iowa) in Cedar Falls. She moved to Canton, SD to teach public school music and math and met her husband, Lafe A. Lunder, when both were members of the Canton Lutheran church choir. They lived on their farm north of Canton before moving into town and celebrated their 50th wedding anniversary before his death in 1993. In 2001 Jane relocated to the Inn on Westport in Sioux Falls where she founded the renowned Westport Bell Choir. For many years she was an enthusiastic volunteer at the Washington Pavilion of Arts and Science in Sioux Falls.

Known for her generous spirit and many acts of kindness, Jane brought the gift of string music to countless youngsters of southeastern South Dakota during her more than 70 years of teaching violin and cello. She was the first South Dakota teacher certified in the Suzuki Method of string pedagogy and was a member of both the Sioux Falls and Sioux City symphony orchestras. Embracing the Norwegian heritage of the community she adopted through her marriage, she was also an accomplished performer on the Hardanger fiddle, the national instrument of Norway.

Jane was preceded in death by her husband, her brother Loring M. Carl, her son-in-law Ross Taylor, and pretty much all of her contemporaries. She is survived by her daughters and their husbands, Janet and Bob Hanafin of St. Paul, MN; Carol Taylor of Apple Valley, MN; and Nancy and Neil Veenis of Shoreview, MN; her son Jim Lunder and his wife Kathy of Sioux Falls, SD; and her son David Lunder of Owego, NY; eight grandchildren and 15 great-grandchildren; as well as generations of nieces and nephews and many young friends.

Jane’s funeral service will be held at Canton Lutheran Church on Sunday, April 29, at 2:00 p.m. Visitation is at Anderson Funeral Home in Canton from 3:00 to 6:00 p.m. on Saturday, April 28. A light lunch and burial at Canton Lutheran Cemetery will follow the funeral service. The family requests that memorials be directed to South Dakota Symphony Youth Orchestra, the Washington Pavilion of Arts and Science, or donor’s choice.