Visitation: Visitation with family present will be Thursday from 6-8 p.m. at Anderson Funeral Home in Canton, SD.
Service: Her memorial service will begin at 2:00 p.m. Friday, April 27, 2018 at Calvary Lutheran Church in Irene, SD. 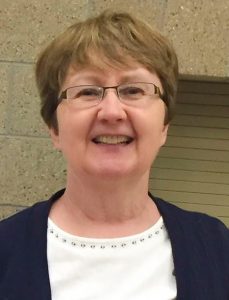 Diane Jane (Baack) Bartling was born on July 18, 1951, in Tracy, MN, to Delbert and Virene (Pedersen) Baack. She grew up on a farm and graduated from Tracy High School in 1969.  After high school, she attended South Dakota State University where she received her Bachelor’s Degree in Nursing in 1973.  On September 1, 1973, she married Fred Bartling at Tracy Lutheran Church in Tracy, MN.  Once they were married, they resided in Canton, SD, and Diane worked as a nurse at Sioux Valley Hospital in Sioux Falls.  About a year later they relocated to Hull, IA, while Fred attended Power Lineman school and Diane worked as a nurse at the Sheldon Hospital.  After Fred’s graduation, the couple moved to Harington, NE where Diane worked as the Director of Nursing at Concord Nursing Home in Yankton, SD.  In 1977, Fred accepted a transfer with NPPD and they moved to the small community of Hay Springs located in the Panhandle of Nebraska.   While living there and raising their two children, Michelle and Chris, Diane worked as a nurse at Chadron Community Hospital in Chadron, NE, along with some stints at Parkview Lodge Nursing Home in Rushville, NE.  They resided in Hay Springs, NE until 2005.  After relocating to Irene, SD, Diane worked as an Emergency Room nurse at the Avera Heart Hospital of South Dakota until she retired in the spring of 2017.

Grateful for being a part of her life are her husband Fred; daughter Michelle (Josh) Dowling from Sioux Falls, SD; son Chris (Alissa) from Hartington, NE; four grandchildren; along with numerous extended relatives and friends.  She was preceded in death by her parents and an infant brother.

Diane was a very kind and caring woman with a great sense of humor.   She will be greatly missed by her family, friends and past coworkers.

She passed away on April 22, 2018, in Yankton, SD.  Her memorial service will begin at 2:00 p.m. Friday, April 27, 2018 at Calvary Lutheran Church in Irene, SD.  Visitation with family present will be Thursday from 6-8 p.m. at Anderson Funeral Home in Canton, SD.  In lieu of flowers, memorials may be directed to Irene Fire & Rescue Service.