Visitation: Visitation with family present will be Sunday, Feb. 25 from 2-4 p.m. at Anderson Funeral Home.
Service: Funeral services will begin at 11:30 a.m. Monday, February 26 at Redeemer Free Lutheran Church in Canton. Private family burial will be held prior to the service. 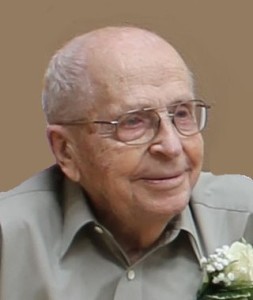 Hans Stensland, age 98, died Tuesday, February 20 at Good Samaritan Village, Sioux Falls, SD. Funeral Services will be held Monday, Feb 26 at 11:30 am at Redeemer Free Lutheran Church in Canton, SD. Visitation with family present will be Sunday, Feb 25 from 2 to 4 pm at Anderson Funeral Home in Canton.  Private family burial will be at Our Savior Lutheran Church cemetery, rural Inwood, prior to the funeral service.

Hans was born January 29, 1920 in Vest-Agder, Norway.  At 6 months old, he came to the United States with his parents, Ole and Severine Stensland and 2 older brothers.  They settled in rural Inwood, IA.   He and his family belonged to Our Saviors Lutheran Church in rural Inwood.   He attended country school in Lyon County, Iowa.  He and his family moved to the Canton area in 1939.   He married Doris Fladmark on June 6, 1943 in Canton, SD.   For 65years they farmed south of Canton.  They celebrated their 74th wedding anniversary in June 2017.

Hans was active in the community including being on the Board for Jensvold # 13 Country Grade School, and on the boards of Farmers Elevator and Farmers Co-Op Oil, as well as participating in Sons of Norway.  He and his family belonged to Lands Lutheran Church until 1984 when they became Charter members of Redeemer Free Lutheran Church in Canton, SD.  Hans loved being a farmer.  He enjoyed golf as a hobby.  But mostly, it was his family that brought him the most joy – his children, grandchildren and great grandchildren. He and his wife traveled to Norway several times to visit relatives.  They also spent some time in Florida.

Hans was preceded in death by 2 infant sons, his parents, 5 brothers and 1 (infant) sister.

Memorials may be directed to Redeemer Free Lutheran Church, Canton, SD or charity of your choice.