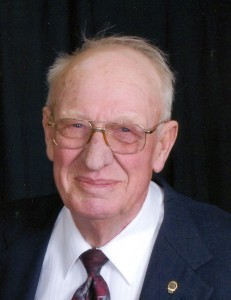 John A. Sorum, age 85, passed away Saturday, December 9, 2017 at his home.  Funeral services will begin at 2:00 p.m. Wednesday, December 13, 2017 at Trinity Lutheran Church, rural Hudson, SD.  Public visitation will be Tuesday from 3-6 p.m. at Anderson Funeral Home in Canton, SD.  In lieu of flowers, memorials can be directed to Gideons International.

He was a life-long member of Trinity Lutheran Church.  He was active in the church council, church choir, township board, school board and Hudson American Legion.  Faith and family were very important in John’s life.