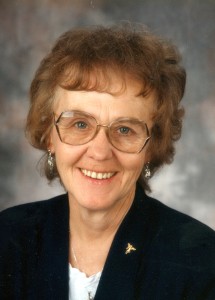 Helen Elaine (Paulson) Nelson, age 78, passed away peacefully with her family at her side Sunday, December 10, 2017 at Sanford Canton-Inwood Hospital. Funeral services will begin at 10:30 a.m. Thursday, December 14, 2017 at Lands Lutheran Church, rural Hudson, SD.  Visitation will be Wednesday from 5-8 p.m., family present from 6-8 p.m., at Anderson Funeral Home in Canton.

Helen worked 43 years in the Lincoln County courthouse, first in the Treasurer’s office, then she was Deputy Auditor, and the last 33 years as Lincoln County Auditor.  Helen enjoyed traveling to places like California by Amtrak, New York, Arizona and Hawaii.  Helen also enjoyed many road trips antiquing with her friends Liz, Dorothy, and Carolyn.  Helen was the navigator and it wasn’t about the “FIND”, it was about the “TIME” with her friends she cherished most.  Helen also enjoyed bowling for many years and researching family history.  Most of all she enjoyed time with her children, grandchildren and great-grandchildren.