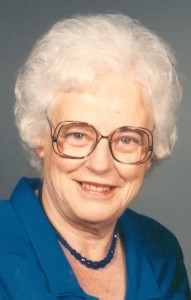 Vera was born on May 16, 1921 on a farm near Garretson, SD to Otto & Hilma (Julson) Sorenson.   She attended country school, Garretson High School and graduated from Augustana Academy in Canton, SD.  In her youth, she was active in her church, Luther League, and 4-H.

She married Homer Ulrickson on January 5, 1943.  Helen, Gregg, and Altie were born to this union.  The family farmed south of Canton until retiring in 1974.  After retiring, the couple ran an antique shop out of their home west of Newton Hills.  Homer died in 1981.

She married Arne Gilbertson on August 16, 1985.  The couple resided in Canton.  Vera was a founding member of Redeemer Free Lutheran Church where she was active in bible group, Ladies Aid, and sang in the choir.  She also volunteered at the Canton Senior Center.  She enjoyed doing hardanger, crafts, braiding rugs, writing poetry, sewing, growing roses, and spending time with family.   Arne died in 2007.