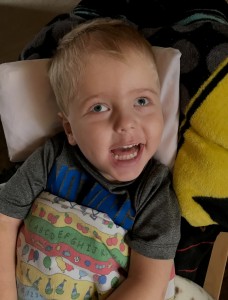 Lucas Gerald Bryson passed away peacefully and in the arms of his parents on November 5, 2017 at Ava’s Hospice House in Sioux Falls, South Dakota.

Lucas was born on February 9, 2015 to Trevor and Alli Bryson. Lucas had a condition known as “Hydranencephaly” which was suppose to give him certain “odds at life” and a poor outlook. Those who knew him know he never let those odds or limitations define who he was. His infectious smile could light up a room. His determination, strength, and will to face any hardship life threw at him was admirable; and that is what he will be remembered for most.

He loved his big brothers Ryan and Beau, listening to music, sitting and soaking up the sun, and being snuggled in the arms of his parents. He will be missed by his family more than words could ever express; but he leaves behind a legacy of life and love and has made an impression on the hearts of many.

Mass of Christian Burial will be at 10:00 a.m. Friday, November 10, at St. Dominic’s Catholic Church in Canton with burial at Forest Hill Cemetery.  Visitation with family present will be Thursday from 5:00 to 8:00 p.m. at the church, with a scripture service at 7:00 p.m.  In lieu of flowers, memorial may be directed to Gillette Children’s Specialty Healthcare, Ronald McDonald House, 200 University Ave., St. Paul, MN  55101 or Ava’s Hospice House, 1320 W 17th ST, Sioux Falls, SD 57117.