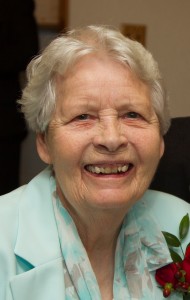 Ingeborg Paulson, 86, died Sunday, July 9, 2017 at her home at Luther Manor nursing home in Sioux Falls, SD.  Ingeborg Rye was born September 27, 1930 on her family’s farm near Reinsvoll in Vestre Toten, Norway.  She was the daughter of Nils Rye and Bertha (Muus) Rye.  After attending country school, she attended one year at Viken folk high school in Gjøvik, Norway.  She enjoyed skiing as a girl, including some ski jumping.  She experienced the German invasion and occupation of Norway from 1940 – 1945 during World War II.

She emigrated to the Luverne, Minnesota area with her aunt Ragna Rye and brother Isak in 1948.  She eventually moved to Sioux Falls and lived there until 1956.  She worked for a time at Lemonds in downtown Sioux Falls.  Ingeborg married Palmer Paulson on November 18, 1956 at Beaver Creek Lutheran Church south of Harrisburg.  They lived and farmed on the family farm south of Harrisburg from 1956 until 1963, when they moved to Sioux Falls.  They moved back to the farm in 1971 and lived there until 1995, when they moved to Canton.  Later in life, Ingeborg was diagnosed with Alzheimer’s disease.  After falling and breaking her hip in August 2010, she moved to Luther Manor in Sioux Falls.  Palmer joined her at Luther Manor in 2016 after faithfully spending time with her on a daily basis as health permitted.

Ingeborg’s faith in Jesus Christ was a central part of her life.  She was an active member of the church and also the Sons of Norway in Sioux Falls.  She had a lifelong love of flower gardening.  Ingeborg and Palmer enjoyed hosting friends at their home, where many people enjoyed her cooking and baking skills. They also enjoyed many trips back to Norway to visit family and friends.

Funeral services will begin at 11:00 a.m. Thursday, July 13 at Abiding Savior Free Lutheran Church in Sioux Falls, SD.  Burial will be held at 9:00 a.m. Thursday at Beaver Creek Cemetery, rural Harrisburg, SD.  Visitation will be Wednesday from 2-8 p.m., with family present from 6-8 p.m., at Anderson Funeral Home in Canton.