Visitation: Visitation with family present will be Thursday, March 9 from 5-8 p.m. at Canton Lutheran Church.
Service: Funeral services will begin at 2:00 p.m. Friday, March 10 at the Canton High School Armory. 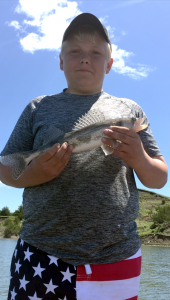 Robert David Trumm was born on August 22, 2002 to Todd and Laura (Koopsma) Trumm in Sioux Falls, SD.  His life ended abruptly on March 6, 2017 which was a shock to family, friends, and the community.  He will always be remembered by all of us in many special ways.

Bob had a zest for life, was everyone’s friend, and he could always get a laugh or smile from anyone. He could always find the positive in any situation or person.  He could strike up a conversation with anyone whether they were young or old, a stranger, or a long time friend.  He never sat still for long and loved bowling, hunting, golfing, camping, cruising with Dan and Jarrett, basketball, football, his dogs, but most of all fishing.  He was cleaning his own fish by the age of 9, running the boat by 10, and had the ability to talk fishing with the best of them. At age 12, he already had his future planned out that he was going to be a fishing guide and had researched colleges that offered fishing scholarships or bowling.  He showed a maturity beyond his years.  He will be missed most for his infectious smile and big hugs.  Till we fish again, Bob, you will be missed.

He was preceded in death by his grandpa, Bob Trumm, Jr.; great-grandparents, Allen and Selma Hanson, Robert Sr. and Maurine Trumm,  Gilman and Edline Haugen, and Richard Koopsma.

94 condolences have been left