Visitation: Visitation will be Wednesday from 2 to 8:00 p.m. at Anderson Funeral Home, Canton, with family present from 6 to 8:00 p.m.
Service: Funeral services will be at 11:00 a.m. Thursday, February 2, 2017 at Bethany Reformed Church in Canton. 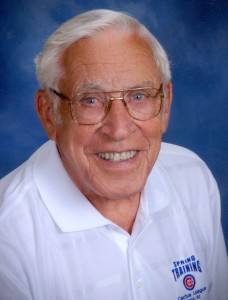 Canton.  Orville “Orv” Brunk, 86, passed away Monday, January 30, 2017 at his home in Sioux Falls.  His funeral service will be at 11:00 a.m. Thursday, February 2, 2017 at Bethany Reformed Church in Canton.  Visitation will be Wednesday from 2 to 8:00 p.m. at Anderson Funeral Home in Canton, with family present from 6 to8:00 p.m.  Memorials may be directed to Melvin (IA) Lutheran Church and Redeemer Free Lutheran Church in Canton.

Orv was united in marriage to Peggy Gathman on November 16, 1952 in Hartley.  Orv began working at Hunting Elevator in Hartley in 1952 and became manager at Hunting Elevator in Canton in 1957.  He retired in 1997, but continued as a consultant for several years.  Orv was very instrumental in bringing the railroads back to South Dakota.  He and Peg spent many years wintering in Arizona.  As an avid Cubs fan, he enjoyed their spring training and games in Arizona.  He was currently a member of Redeemer Free Lutheran Church in Canton and past member of Canton Lutheran Church.  He was a member of the Rotary Club and Canton Chamber of Commerce, serving as past-president of both organizations.  Orv was an honorary member and past-president of the Southeastern Elevator Association.  He was a member of Hiawatha Country Club and was part of the M2 Program at the State Penitentiary for 4 years.