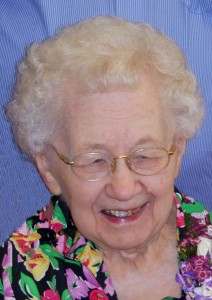 Glenda was born on October 2, 1919 in Dell Rapids, SD to Lorntz and Gertrude (Lassessen) Haugen.  She grew up on the family farm and attended Moen school.  She loved music and was an organist at East Nidaros and an accompanist for the Orpheus Male Chorus.  She married Kermit Helgerson on February 2, 1946 at East Nidaros.  The couple lived and farmed near Canton.  She was the organist at Canton Lutheran for over 30 years and also played for the Grieg Male Chorus for a number of years.  They couple moved into Canton in 1985.  She was a member of Canton Lutheran Church, the American Legion and VFW Auxiliary, and a charter member of the Sons of Norway.

Grateful for sharing her life are her son, Leland, Circle Pines, MN;  sisters-in-law,  Doris Olseth and Helen Eiesland; along with numerous other relatives and friends.  She was preceded in death by her husband, Kermit; her parents, 2 sisters, and 3 brothers.