Visitation: Visitation will be Friday from 2 to 8:00 p.m. at Anderson Funeral Home in Canton, with family present from 6 to 8:00 p.m.
Service: Funeral services will be at 1:30 p.m. Saturday, October 29, at Canton Lutheran Church. 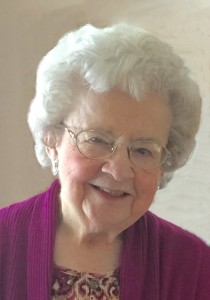 Edline was born October 15, 1918 at White, SD to Eilt and Jessie (Reuter) Lutterman.  She received her education at country school and White High School, graduating in 1936.  She attended General Beadle State Teachers College of Madison, SD for one year. She then taught in rural schools for 12 years.

Edline was united in marriage to Gilman Haugen of Garden City on April 13, 1947.  After her husband attended jewelry and watch repair school in Kansas City, MO, they moved to Garretson, SD where they started and operated a jewelry and watch repair store for ten years. In November of 1959, they moved to Canton and purchased Moe Jewelry store.  They operated Haugen Jewelry Store for 30 years, retiring in 1989.  Her husband Gilman died in 1993.

An active member of Canton Lutheran Church, Edline taught Sunday school and sang in the choir.  She volunteered at church and other city organizations as well as working full time at the jewelry store.  Edline was a member of the American Legion Auxiliary since 1951.  She also enjoyed sewing for her daughters and herself.

Edline remained active until the end.  Her motto was “Never say no”.  She looked forward to yearly trips to Pennsylvania to visit Konnie and her family.  She enjoyed helping at church, attending weekly card club, Birthday Club at Lauries Café, and her lunch and supper dates with her friends.

Memorials may be directed to Canton Lutheran Church and Breast Cancer.