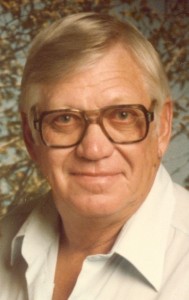 Harvey J. Thompson, 89, passed away Friday, August, 12, 2016, at Southridge Health Care in Sioux Falls.  His funeral service will be at 10:30 a.m. Monday, Aug. 15, at Heritage Funeral Home in Sioux Falls.  Visitation will be an hour prior to the service.

Harvey was born November 29, 1926 at Keystone, SD to Herman and Altha (Woken) Thompson.  He served in the Army during WWII and was stationed in the Philippines.

Harvey was united in marriage to Pat Mertz June 14, 1952 in Luverne, MN.  He worked for Northern National Gas Company for 32 years, retiring in 1984.  He then owned and operated P & H Lawn Service and Snow Removal since 1984.  He enjoyed fishing and working outdoors.  He had been a member of St. Michaels Catholic Parish since 1984.

Those grateful for having shared his life are: daughters, Linda (Richard) Gustafson, Canton and Deb (Denny) De Groot of Sioux Falls; son Tom Thompson, Sioux Falls; 13 grandchildren; 16 great-grandchildren; and 1 great-great-granddaughter.  He was preceded in death by his parents, wife, Pat, daughter, Cindy, 3 brothers, and 2 sisters.