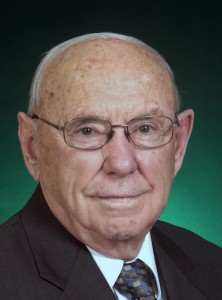 Glen A. McVay, age 86, passed away on Saturday, June 25, 2016.  Funeral services will begin at 10:30 a.m. on Wednesday, June 29, at Holy Spirit Catholic Parish, Sioux Falls. Visitation will be held at Heritage Funeral Home, Sioux Falls on Tuesday from 2:00 to 8:00 pm, with the family present from 6:00-8:00 pm with a Rosary at 7:00 pm.  Interment will be at Forest Hill Cemetery in Canton, with Military Honors by the VFW and American Legion.

Glen was born on August 22, 1929 in Harrisburg, SD to Roscoe and Vera (Haas) McVay. He graduated from Canton High School in 1947, and was united in marriage with Margaret Ronan on December 29, 1948. They farmed the McVay Farm east of Canton for 23 years. He served in the South Dakota National Guard from 27 March, 1947 to 31 October, 1964, and served as the Battery Commander of the 1st Howitzer Battalion, 147th Field Artillery Group in Canton. He deployed with his unit to Fort Richardson, AK in 1951-52 during the Korean War and was activated to active duty at Fort Sill, OK in 1961-1962, where he was awarded the Army Commendation Medal for meritorious service. Capt McVay received an Honorable Discharge from the US Army on 31 October, 1964 and returned to farming full time until moving to Canton in 1971. In November 1963, he was selected as the area’s Outstanding Young Farmer by the Sioux Falls JayCees Young Farmer Program. Glen was part owner of Dakota Fertilizer Company and later employed for many years by Huntting Elevator Company in Canton. After moving to Sioux Falls, he worked for Ideal Yardware.  After 57 years of marriage, Margaret passed away in March, 2006. Glen married Jeanette Eichacker in September, 2008.

Glen was very active in the Canton community, serving as a City Commissioner from 1978-1984. Glen was elected to the South Dakota State House of Representatives and served one term representing Lincoln County from 1984-1986. He was a long time member of St. Chrysostoms and later St. Dominic Catholic Churches in Canton. After moving to Sioux Falls, he was a member of Holy Spirit Catholic Parish.

He is preceded in death by his parents, wife, Margaret; son, Major (USAF) Michael McVay, and sister, Ardis Else.