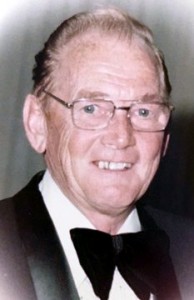 Ellenton, Fl.  Perry Juel, 91, formerly of Sioux Falls and Canton, passed away Friday, May 27, 2016 at his home in Ellenton.  A graveside service will be held at 3:30 p.m. Saturday, June 4, at the Lutheran Cemetery north of Canton.

Perry was born December 10, 1924 in Lincoln County, one of 8 children, to Paul and Pearl (Wahl) Juel.  He attended school in Canton, graduating in 1943.  Perry served in the US Navy during WWII.  Following his discharge, he attended Chillicothe Business College in Chillicothe, MO.  He married Thelma Stadum June 4, 1950.  They lived in Sioux Falls until 1979, when they moved to Florida.  He was a partner with his brother-in-law at Stadum Construction in Sioux Falls for many years.

Perry is survived by his wife of 66 years, Thelma; one son, Craig of Connecticut; 2 granddaughters, Christen and Caroline;  one great-grandson, Graham; and a host of nieces and nephews.  He was preceded in death by his parents, one son, Brian, and 7 brothers and sisters.