Visitation: Visitation will be Thursday from 2-8 p.m., family present from 6-8 p.m., at Anderson Funeral Home in Canton.
Service: Funeral services will begin at 1:30 p.m., Friday, May 27 at Canton Lutheran Church. 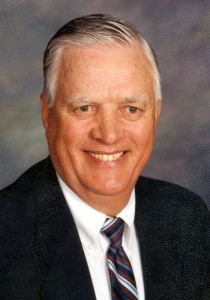 Dick was born on November 17, 1933 in Elk Point, SD to Edward and Ella (Howey) Hoffman.  He graduated from Elk Point High School.  He attended Southern State Teachers College for one year.  He married Dorothy Beatty on March 19, 1954 in Sioux City, IA.  He served in the US Army from 1955 to 1957.

Dick is survived by his wife of 62 years, Dorothy; sons, Mike (Marcia) and Gary (Kathy); daughters, Lori (John) Lems and Diana (Jim) Wiebe, all of Canton, SD; brother, Ronald (Beverly) Hoffman; sisters, Kay (Darmon) Staum and Shirley (Jon) Larsen, all of Elk Point, SD; 11 grandchildren; 9 great- grandchildren; along with numerous other relatives and friends.   He was preceded in death by his parents and granddaughter, Shantell.

In lieu of flowers, memorials may be directed to Milk’s Camp or the Canton Lutheran Church Basement Renovation.