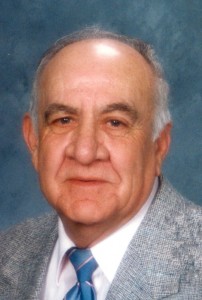 Canton. Donald G. “Don” Markle, 86, passed away Wednesday, August 5, 2015 at Canton Good Samaritan Society. His memorial service will be at 2:00 p.m. Saturday, August 8, at Canton Lutheran Church. Burial will be at Canton Lutheran Cemetery at a later date.
Donald Gene Markle was born July 1, 1929 in Hudson, SD to Charles and Maude (Stuckey) Markle. He graduated from Canton High School in 1948.
Don was united in marriage to Arlene Steenholdt, March 26, 1954 in Canton. He was baptized and confirmed as a member of Canton Lutheran Church. Don worked as a mechanic at John Deere Farm Store for John Sweetman for several years, later working at Fait Brothers Chevrolet as a mechanic. He spent most of his mechanic years at A & S Motor, Steensland Buick, and Gaspar Motor.
Don had an interest in helping Tom Winter and Dennis Mathison as mechanic for their race cars. Don like working with wood and made many “sprint” cars for his grandsons and friends. In his leisure time he enjoyed fishing with friends and family.
Grateful for sharing his life are his wife of 61 years, Arlene; daughters- Deborah (Mike) Hoogendoorn, Rock Rapids, IA and Sheila (Terry) Nelson, Sioux Falls, SD; six grandchildren; eight great-grandchildren; three sisters- Lucille (Arnold) Eliason, Maxine (Sheldon) Bresee, and Betty (Howard) Severson. He was preceded in death by his parents, two brothers, and five sisters.