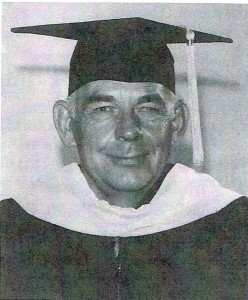 Noel Nordahl Nervig was born in Alberta, MN in 1923, son of Edward Nervig and Hazel Williams. He was born in a family of eventually six children, Edward Jr., Newman, Dorothy, George, Nordahl, and Robert.  He was raised in Canton, S.D. where he finished high school and attended a year at Augustana College.
Nordahl worked as a farm hand until World War II. He failed to get in the Army due to sight issues so he joined the Merchant Marines instead. While in the Merchant Marines, he traveled around the world twice before getting out of the Merchant Marines in Paris, France after the war. His Brother George managed to help him get into the Army in 1946.
Also in 1946, while in Paris, he met and married Yvonne A. Delgehier. The couple went on to have 3 children, Nicole born in 1947 in Austria, Monica born in 1949 in Colorado Springs, and Olaf born also in Colorado Springs in 1951.
Nordahl stayed in the Army for 20 years with tours of duty in Germany, Greece, and traveling through Europe several times.  He retired in Utah working for Thiokol/Job Corp obtaining his Bachelor’s Degree at Weber State.
For his hard work and experience at Thiokol he received a grant to Utah State University. After six years he obtained his Master’s and finally a Doctorate a Utah State. Nordahl went on to work at the University of Southern Illinois where obtained his tenure after 10 years. After writing a book on education, he retired in 1991.
After many years in the Army while being around loud missiles and rockets he soon began to lose his hearing and eventually went deaf. His grandson managed to get him into the Tricare/Medicare program and he was able to get into a program that just started up, where they provided him a Cochlear hearing implant which allowed him to hear again.
Nordahl died in his home in Millville, Utah on March 24, 2015. Nordahl is survived by one brother, George 94 and his one sister Dorothy who is 98. He is also survived by his one son, Olaf, his daughter, Nicole, 6 grandchildren, and 4 great grandchildren.  Inurnment will be at the Lutheran Cemetery near Canton, SD.
www.andersonandsonsfh.com