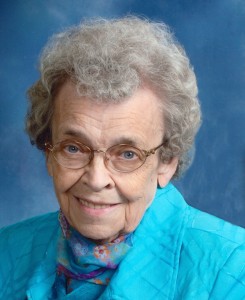 Louise A. Sorum, age 82, passed away Sunday, May 24, 2015, at the Sanford Heart Hospital.  Funeral services will begin at 2:00 p.m. Friday, May 29 at Trinity Lutheran Church, rural Hudson, SD.  Public visitation will be Thursday from 3-6 p.m. at Anderson Funeral Home in Canton, SD.  In Lieu of Flowers, memorials can be directed to Gideons International.

Louise was born on April 25, 1933, to Elmer and Della (Ingebrigtson) Peterson in the log house on the Thormodsgaard homestead which now stands in Prairie Village in Madison, SD.  She attended Fairview Center District #83, Pleasant Valley School #74, and graduated from Augustana Academy in 1951.  She married John A. Sorum on June 21, 1957, at Trinity Lutheran Church, rural Hudson, SD.

She was a life-long member of Trinity Lutheran Church and was the Moe Parish secretary from 1952 until her retirement in 2013.  She was active in Ladies Aid and Bible studies.  She also enjoyed quilting and was known for her cooking.  Faith and family were very important in Louise’s life.