Visitation: Visitation will be Thursday from 2-8 p.m., family present from 6-8p.m., at Anderson Funeral Home in Canton. A Masonic service will be held at 7:00 p.m.
Service: Funeral services will begin at 10:30 a.m. Friday, April 3 at Canton United Methodist Church. 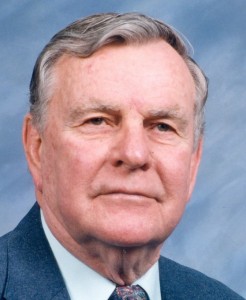 Earl Dean, age 87, passed away Sunday, March 29, 2015 at Sanford Canton-Inwood Hospital.  Funeral services will begin at 10:30 a.m. Friday, April 3 at Canton United Methodist Church.  Visitation will be Thursday from 2-8 p.m., family present from 6-8p.m., at Anderson Funeral Home in Canton.   A Masonic service will be held at 7:00 p.m.    In lieu of flowers, memorials can be directed to the Canton Student Loan Fund.

Earl William Dean was born on September 1, 1927 in Olivet, SD to William and Katie (Grim) Dean.  The family soon moved to Sioux Falls where Earl graduated from Washington High School in 1945.  He then attended Augustana College for a year before entering the Army.  Upon his discharge, he resumed his studies at USD, obtaining his Master’s in Education.  He married Mary McBride on November 22, 1951 in Sioux City, IA.

Earl began his lifelong career in education in Montrose, SD as a teacher and coach for 5 years.  He then moved to Marion, SD where he taught for a year and was superintendent for 4 years.  His career next brought him to Salem, SD for 7 year as superintendent and finally 20 years as the Canton, SD superintendent.

Earl was active in the Canton United Methodist Church.  He served as treasurer and was interested in the youth programs.  He enjoyed fishing, gardening, and loved to visit with people, especially at the coffee shop and senior center.  He was a 50+ year Mason, member of the Rotary, and was on the Canton Student Loan Fund Board.  He enjoyed and excelled at basketball in his high school and college days.  He also played softball in his younger years and was active in the YMCA, where he learned to play basketball as a kid.