Visitation: Visitation will be at the church Monday from 10:00 a.m. to noon.
Service: Funeral services will begin at 1:00 p.m. Monday, December 22 at St. Paul Lutheran Church Freeman, SD. 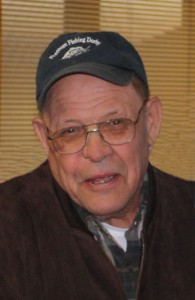 Tom was born August 9, 1939 in Sioux Falls, SD to Fred and Ella (Jundt) Stolp.  He graduated from Freeman High School and SDSU in Brookings, with a concentration in the industrial arts as well as art history.  He served in the U.S. Navy as a submarine specialist from 1959 to 1962.

Tom was a career insurance representative with primary responsibilities in the area of claims and rate adjustment serving clients South Dakota, North Dakota, Nebraska, and Minnesota.  He also was the owner of an antique and coffee house business in Ft. Scott, KS.

Tom was married to LeAnn Irons for 20 years.

Tom was currently living in Freeman, where he has resided since 2004.  He was a member of St. Paul Lutheran Church, where he was baptized and confirmed.  He was a former member of the Freeman City Council and a member of the American Legion, where he actively participated in Veteran’s Day and Memorial Day ceremonies.  He was the proud founder of the Freeman Fishing Derby.  An avid sportsman throughout his life, he enjoyed hunting, fishing, ice fishing, boating, and water skiing.  Tom was a talented craftsman, woodworker, and avid collector of guns, fishing gear, and American Flyer trains.  He also was a pilot and loved to fly.