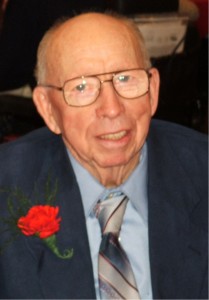 Wilbur “Willie” Meelberg, age 89, passed away Thursday, October 9, 2014 at Morningside Manor in Alcester, SD.  Funeral services will begin at 2:00 p.m. Saturday, October, 18 at Canton Lutheran Church, Canton, SD.  Visitation will be one hour prior to the service.

Willie was born on January 29, 1925 in Tabor, SD to Thuman and Ellen (Glynn) Meelberg.  In 1940, Willie and his sister, Dorothy,  were adopted by Albert and Nora (Glynn) Detmer. He graduated from Worthing High School in 1944.  He served in the U.S. Army from 1951 to1953, including 19 months in Okinawa.  Willie began his career farming.  He then worked construction for a short time before working for Mel James at Standard Oil for 5 years.  He then purchased the station from Mel and ran it as Willie’s Standard for 27 years.  Before retiring in 1991, he worked for Harold’s Photo.   He enjoyed golf and traveling, especially his trip to Scandinavia.

His family expresses great thanks to Morningside Manor for all they have done for Willie these past years and to Asera Care Hospice for the care they have provided the past few months.