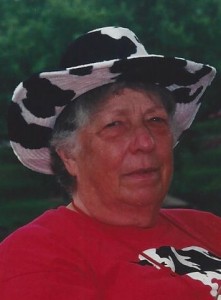 Janet was born in Canton, SD in 1936, moving to Sioux Falls when her parents purchased a large farm. After graduation Janet served in the Navy between 1954 and 1956; she received an honorable discharge after finding out she was pregnant with RuthAnne.  During the next decade she had two more children and achieved a double major in Mathematics and German.  She then relocated to Germany for a couple years to perfect her German.

In Germany she worked as a programmer from 1969 to 1972 and after returning to the United States worked as a Sr. Programmer for large companies such as Macy’s and Levi’s Strauss before returning to South Dakota in 1978; a huge accomplishment for a woman at that time. While in California, she became a woman’s rights activist which she continued to be involved in until her death. After returning to Sioux Falls, Janet became a member (as her mother and sister had done) in the Sioux Falls Bardic Poetry Society. She started her own publishing company, Tasseract Publications, which allowed her to publish the Bardics monthly magazine, Pasque Petals, for many years, along with many books of poetry of her own and others.

Her hobbies included cooking, gardening, sewing and needlepoint; her Raggedy Ann and Andy dolls won first prize at the fair. She enjoyed traveling; highlights were her trips to Germany with Rose and China with Pam. She also enjoyed reading, opera and loved her animals which included dogs, cats and geese.