Service: Celebration of her life and interment will take place in Lisbon, North Dakota at a later date. 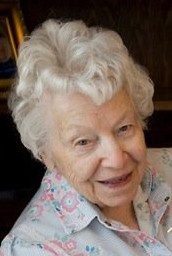 Cecelia Oliphant, 108 years, died June 2, 2014 at Good Samaritan Center, Canton, South Dakota.
Cecelia Anna Bertha, was born the third of five children to Ernest Carl & Magdalena Otelia Fernow on August 12, 1905, in Enderlin, North Dakota.  She attended Enderlin High School; graduated with a teacher’s certificate from Valley City State Teacher’s College, and taught children in one-roomed schools for 9 years.  She married Norman Sterling Oliphant in 1932 and they raised two children, Ronald Arthur and Mary Ann, while farming in Lisbon, Elliot, Sheldon and Enderlin, North Dakota.  After Sterling Oliphant died in 1960 she completed her Bachelor’s degree at Valley City State University and resumed teaching grade school in Fargo and West Fargo, North Dakota until retirement.  In 1992 she moved to Canton, South Dakota, to live with her daughter.
She was an avid gardener, enjoyed sewing, music, painting and travel.
She was an active member of the Lutheran Church and continued to volunteer in elementary school classrooms into her 90’s.
Cecelia Oliphant will be especially remembered for her positive outlook on living.
She was preceded in death by her siblings, husband and son.
Survivors include daughter Mary Ann (Oliphant) Siverson; six grandchildren and three great-grandchildren.
Celebration of her life and interment will take place in Lisbon, North Dakota at a later date.