Visitation: Visitation will be Wednesday from 2-9, family present from 7-9, at Anderson Funeral Home in Canton.
Service: Funeral services will begin at 2:00 p.m. Thursday, May 8 at Springdale Lutheran Church, rural Harrisburg, SD. 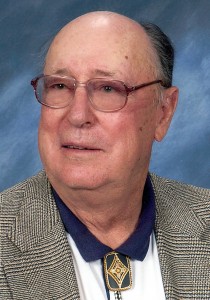 Carroll Duane Heath went to be with the Lord on May 5th, 2014 at Fellowship Village in Inwood, IA. Funeral services will begin at 2:00 p.m. Thursday, May 8 at Springdale Lutheran Church, rural Harrisburg, SD.  Visitation will be Wednesday from 2-9, family present from 7-9, at Anderson Funeral Home in Canton.

Carroll was born May 21st, 1925 in Volga, SD to Fred and Mary Isabelle (Stewart) Heath. Carroll graduated from Rutland High School in 1943.

Dad served in the Army from June of 1944 till April of 1946, after which he spent 2 years in California where his two sisters lived.

Dad married his sweetheart Hjordis Lucille Eriksrud his wife of 55 years, February 16, 1950. Together they worked on the family farm near Sinai, SD from 1950 till 1960.

Dad & Mom moved to Sioux Falls for a short time, where they met many life-long friends. In 1962 they moved to a farm east of Sioux Falls.

Dad hobby farmed and worked at Kolman/Athey in Sioux Falls for 27 years, retiring in 1990. They continued to live at the farm until they bought a house in Canton in 2003, so they could be closer to their children and grandchildren.

Dad spent his retirement maintaining his yard, which he took great pride in, working on family history and enjoying his family. He also loved to do woodworking in his shop; there he spent many long hours building knick knacks, furniture and other items for the family. He also built and designed a replica of Springdale Lutheran Church.

Dad loved to have his family gather at his house so he could enjoy his 13 grandchildren, 26 great-grandchildren and 1 great-great- grandchild.

Dad was preceded in death by his parents, his seven siblings, his loving wife Hjordis and one great grandchild Amelia Grace Heath.