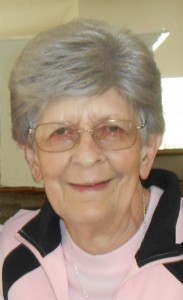 Theola Grace Severson Parke, 85, passed away peacefully on February 19, 2014 at the Pleasant Care Living Center in Pleasantville, IA with family at her side.  A memorial service will be held at 10:00 a.m. Saturday, May 17, 2014 at Anderson Funeral Home in Canton.

Theola was born on December 21, 1928 on the family farm near Canton, SD to Adolph and Thelma (Ugland) Severson.  She attended country school and graduated from Canton High School.   She was united in marriage to George Parke of Canton on October 1, 1949.  The couple made their home and raised four children in Indianola, IA, where her husband practiced optometry.  Theola also worked as an optometric assistant.  Theola had a unique nature to make friends with everyone and everyone enjoyed calling her “T”.  She loved her gardening and she was a natural for loving her grandchildren, nieces and nephews.