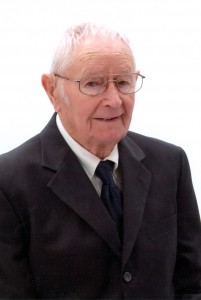 Sylvan Charles Golden was born in Shindler, SD, when they were visiting with relatives, to Charlie and Myrtle (Mathison) Golden on December 12, 1920. Sylvan attended schools in Sioux Falls through the 11th grade, and beyond that, he was entirely self-taught. He was employed by the Gores Coal Company in Sioux Falls, hauling coal and doing the minor maintenance work on the truck.

Sylvan joined the Army on August 14, 1942 and served with Company A 6th Engineer Battalion on Oahu, New Guinea, the Philippines and Korea. He was in charge of the motor pool, including maintenance and re-building all types of vehicles. He built bridges and roads, and was in the initial landing on Luzon. He was discharged from the Army on December 13, 1945. Sylvan was very proud to have served his country during World War II, and later became a lifetime member with the Canton VFW where he served faithfully until a couple months before his death. He enjoyed going on the Honor Flight in 2010 to Washington DC to see the World War II memorial and other sights.

Sylvan married Geraldine VanGronigen on January 18, 1946, and they lived for a short time in Flandreau, SD. They moved to a farm northwest of Canton in February 1948 where they farmed and raised four children, polka danced with a Couples Club, and were active members of Beaver Creek Lutheran Church. Sylvan welded like a pro and could fix, build, or rebuild anything. Many neighbors and friends brought broken parts and machinery to him for repair.

Sylvan and Geri moved from the farm to Canton in 1968 where he worked for Dakota Fertilizer. In 1973 they moved to Phoenix, AZ, where Sylvan worked for Carlson Systems, a specialty shop that later changed to Kistler’s. Sylvan started as a one-man shop designing, building and installing whatever the customer requested, anything from side-dump garbage containers to industrial roller conveyors. Eventually the business grew to several men working under his direction where he taught them welding, machine operating and spray painting. Sylvan and Geri danced at various polka fests and participated in dance performances with the German-American Club. Sylvan retired from work in 1993 and in 2000 they moved back to Canton, where they bought a house.

Sylvan enjoyed spending time with his family and friends, regaling them with many stories about his life and experiences, and he definitely loved to dance, attending polka-fests for many years. Sylvan loved to tell and hear a good joke. He never had a problem starting a conversation with anyone – whether he knew them previously or not. He liked to hunt for ducks and pheasants, and to fish.